Take a trip to the Zone with Llamasoft, in the twitch gaming shoot ’em up classic Gridrunner++. Face wave after wave of increasingly ferocious and insane opponents in glorious, retina scorching, psychedelic themed parallax scrolling levels. Think you’ve got what it takes? Find out in the online high-score table of all-time greats.

Gridrunner++ is a shooting game written by Jeff Minter originally planned for Pocket PC but released commercially for Windows.  It has since been ported to Mac OS X.

It was offered only as shareware for download from the Llamasoft website, with a registration fee of £5.

Note: The iPhone, Java applet, Flash for Facebook versions are no longer available.

The “Special Edition” of Gridrunner++ was originally created for a gathering of members of the Llamasoft forums YakYak.org taking place in London. It was originally only available at that gathering or via word of mouth from those who had attended. It was later released by Jeff for download by anyone. The Special Edition is based on the registered version of Gridrunner++; no trial version of it exists.

~The main title reads “Gridrunner++ London Jolly 2 Special Edition”.
~The sheep picture on the opening title page is replaced by a picture of a plate of Vindaloo.
~The displayed play area is much larger and has a larger horizontal dimension than vertical.
~Enemies move much faster, making the game much harder than the standard version.
~The player’s ship can fire horizontally by holding down the left mouse button.
~The “secret” ships from the original version are the defaults in the Special Edition.
~Whenever the player’s ship is destroyed, one of several samples of a group of people swearing is played. This group is actually composed of all the people who attended the board gathering who met up in Jeff’s hotel room in London and were sampled on his laptop.
~Numerous other samples are added or altered.
~An extra “endurance mode” option is added, in which the player aims to score the highest amount possible on one life.

Note: The Special Edition contains vocal sound samples of very strong swearing, so do not play it if such coarse language offends you! 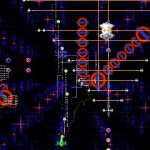 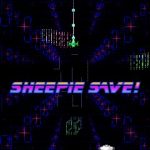 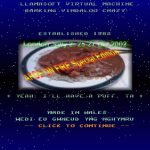 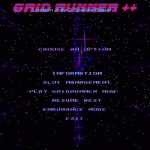 (has the sound files recorded in the hotel room)

This page uses material from the Wikipedia article Gridrunner++, which is released under the Creative Commons Attribution-Share-Alike License 3.0.