Confusingly, Gridrunner 2 was released in the US under the name Attack of the Mutant Camels, which was also the title used for a totally different game released the same year [by Llamasoft]. 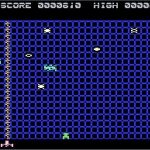 This page uses material from the Wikipedia article Gridrunner, which is released under the Creative Commons Attribution-Share-Alike License 3.0.